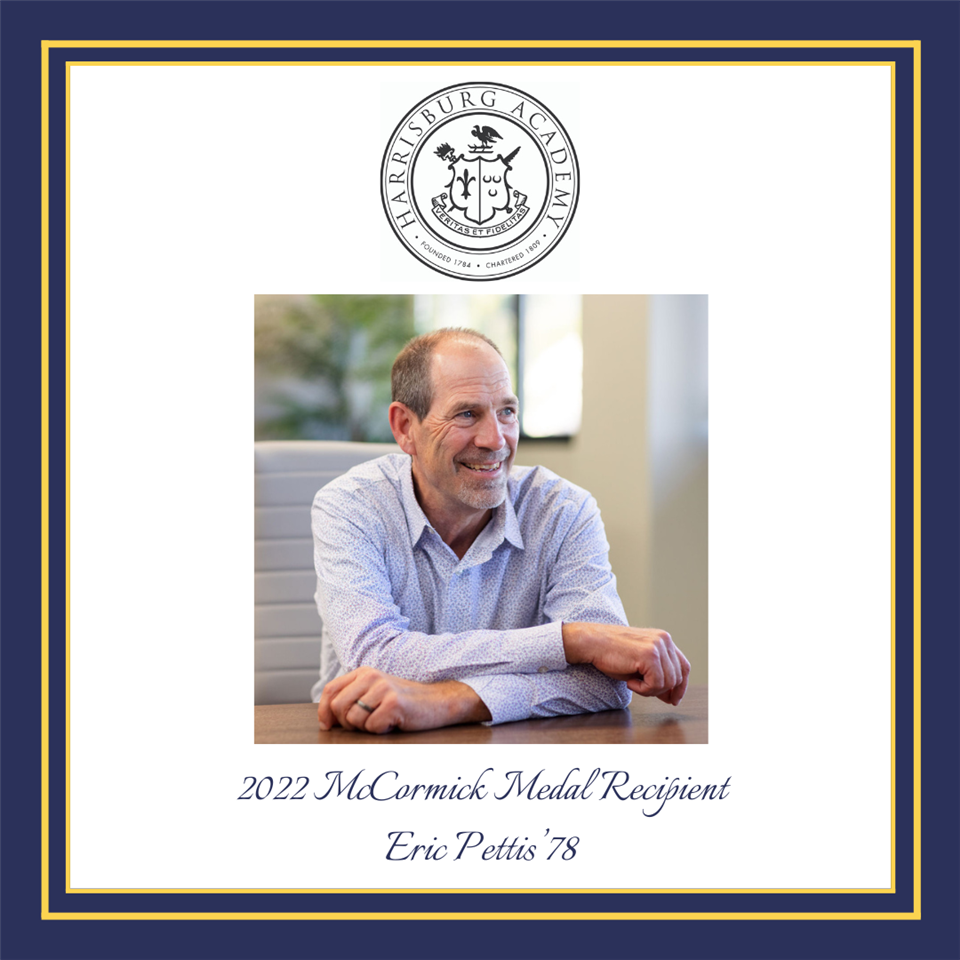 10/17/2022
Communications Department
On October 16, members of the Harrisburg Academy community gathered together to celebrate Founder's Day, an opportunity to celebrate many of the values for which the Academy stands–service, leadership, and dedication– which define not only the school, but all those who are part of it. During this celebration, Harrisburg Academy presents the McCormick Medal, our highest honor.

The McCormick Medal is presented to members of the Harrisburg Academy family for dedicated leadership and meritorious service to the school. The award is named in honor of Vance C. McCormick, a former Academy student, prominent Harrisburg civic leader, and national advisor to President Woodrow Wilson. Vance McCormick also served as a member of Harrisburg Academy's Board of Trustees for 40 years, including 34 as president.

The recipient of the McCormick Medal exemplifies the values of the Academy–respect for individual differences, integrity, truthfulness, and commitment to working with others for the common good of the school community. This year's award was presented to Eric Pettis '78. To view photos of the event, please visit our Flickr album.

About Eric Pettis
A member of the Class of 1978, Eric was an extremely talented student athlete, and has been recognized in Harrisburg Academy's Athletic Hall of Fame. During his time as a student, he played soccer and basketball, served as a co-captain, and established a record for the most points in a season for basketball. He continued to play soccer in college and graduated from Bloomsburg University with a degree in mass communications. He currently serves as the President of Comprehensive Financial Associates in Harrisburg. In this role, Mr. Pettis manages the firm's advisors and provides wealth management advice to individual clients, as well as companies, regarding qualified retirement plans. His commitment to lifelong learning and sense of integrity are demonstrated through achieving the Accredited Investment Fiduciary designation, allowing him to act as a fiduciary while consistently putting his clients' needs first. His primary mission is to serve as a teacher, guide, counselor, and friend to his clients and team.

Eric consistently seeks to give back to organizations that have contributed to his success. Throughout the capital city region, he has serves as an owner and board member at various organizations, including Harrisburg Academy. Currently, he is serving on Harrisburg Academy's athletics committee to advance the profile of Spartan athletics within the school and the greater community. He lives in Harrisburg with his wife Patrice, and is a proud father to Erica, Taylor, Isaiah, and Garret.
Back